Our most recent entry to the International Writers Inspiring Change Hall of Fame is Annette Oppenlander – author of Surviving the Fatherland. We did an Author Spotlight on Annette and we recently reviewed her book, which can be seen HERE. We realized in the course of reviewing her book that the amount of work she put into research, the painstaking details she uncovered about a gruesome part of history and the the ordeals her own family underwent during World War II, was inspiring to say the least – and for that reason we invited her to be part of our Hall of Fame. Here is her story, and we welcome Annette to the IWIC Hall of Fame.

What prompted you to write SURVIVING THE FATHERLAND?
Growing up I always felt there were a lot of stories hidden in my family. I’d hear bits and pieces, quick references or watch my parents nod at each other in silent understanding. As my interest in history grew, my curiosity grew with it. So in 2002 I asked my parents to share their stories. I spent several weeks visiting them in Germany and recording their memories. I remember one afternoon we were in the basement while my mother ironed. I’d ask questions and she’d tell me about the way her mother treated her. I still have those tapes though it’s hard for me to hear my mother’s voice. She passed away in 2004.My mother always insisted that my father was the better storyteller. And while I agree that his activities were quite adventurous, my mother’s quieter side offered a lot of depth. And so I think the two characters balance each other out nicely. 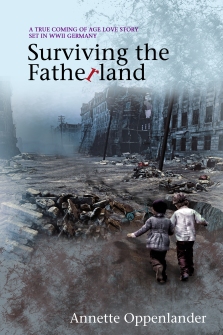 Initially, I had planned to write short stories so my children could remember their grandparents. But then I realized there were few if any stories about Germany’s war children and the civilian side of WWII. Of course, we have excellent and moving stories about the Holocaust and the soldier’s war. There is no shortage of battle scenes. Yet, many battles were fought at home. They weren’t drawing as much attention, but they were just as heroic. I wanted to add complexity to the stereotypical portrayal of Germany in the Third Reich.

Why did you spend some 15 years researching the subject? What made that mission so important to you?
It seems excessive, doesn’t it? The first complete version of this novel was done in 2009. I worked with an editor, but my ability to write was still too rudimentary. I also experimented with chronology, tense and point of view. Every time I visited Germany, I stopped by the Solingen city archives and asked my father more questions. Meanwhile I continued writing, editing and honing my craft. I wrote five more novels—three are published through a UK publisher—one is self-published and one is still in manuscript form. The story of my parents kept haunting me. So I’d return to the manuscript and rewrite it. Sent it through critique groups, found beta-readers and took it to two week long Don Maass workshops, applied what I’d learned and put it away again because I felt something was still not right. At times I thought I’d never figure it out. But then last fall something changed and I decided I needed to finish. My father is 88 years old and won’t be around much longer. I wanted this book to see the light of day while he is still with us, but I also felt strongly that it needed to be done just right. So, I hired a good editor to look at the novel with fresh eyes. My manuscript returned with great insightful suggestions and so I went to work one last time. The result of that work is SURVIVING THE FATHERLAND.

What hurdles and obstacles did you have to personally overcome to find the facts and information which formed the platform for the story?

It was hard to find good information about Solingen in the later war years and early postwar years. The local newspaper closed for a while when the city was destroyed in November 1944.

I pieced together a lot of local information. Sometimes, I’d have a question while writing and call my father in Germany. Did he remember what a loaf of bread cost on the black market in 1946?

When were the water and gas lines restored after the bombing? Thank goodness for inexpensive international phone service. It was also not easy to ask my parents some of the questions that were so personal and painful.

My mother’s horrible relationship with her mother, Mutti, weighted her down all her life. Her complicated relationship with her father, Vati, was also hard to grasp. Neither of her parents ever liked my father. After my mother died, I was extremely sad. She’d been the healthiest living person I knew. Always ate organic food, didn’t drink, didn’t smoke, lived in a nice home. Do you realize that continued resentment is one of the causes of high blood pressure? I believe she resented her mother’s refusal to love her all her life. In 2004, one month before her 50th anniversary, she suffered a major brain hemorrhage from chronic high blood pressure and passed away six months later. She was 72.

How difficult was it for you and your family to revisit a time as brutal and painful as WW II and the memories they had about it?
When I began this project I hadn’t realized how much ‘dirt’ was hidden in my family’s past. But once we started talking I knew there was a lot going on. I heard the emotion in my mother’s voice when she spoke about Vati, her stay in the east when she stole the wallet and ring to force her foster family to send her home.

I think both parents struggled with some of the details I kept digging for and I sometimes felt they left out their innermost fears. Or maybe the human mind has a way to protect itself and forget some of the things. That’s why SURVIVING THE FATHERLAND is a novel based on a true story and not a true biography. I had to take some liberties and add my personal interpretation to some of the events.

Was there emotion and upset caused, just in attempting to dig into it and/or relating it?
I know my mother suffered from the way she was treated all her life even in retirement. Deep down I think she was always deeply hurt by this lack of love and affection, but she never complained. Not only that, she provided my sister and me with a loving and warm home. It’s quite possible my questions renewed some of that anguish and reopened old wounds. I’d like to think that talking about it to me was a bit therapeutic. But I’m not sure. Neither of them ever complained to me or let me feel any less loved for stirring them up.

How tangible was the ordeal to you in hearing their stories?
Very. I already had a good idea what Solingen had been like during the later years of the war, especially the citywide bombing in November 1944. But hearing my father detail how he’d slaughtered the horse was quite moving. He said at the time that when you’re that hungry, you’re willing to do anything. In our western world we can’t imagine this kind of hunger. My mother talked about making grass soup. Sitting next to them on the couch, I heard their emotion and I saw their expressions.

How do you see your work, and the story that developed, affecting the world or the minds of readers in the future?
I hope I can shed additional light on this horrific time in human history. I want to make it clear that not all Germans living during the Third Reich were Nazis. Not every person was evil. I also want readers to see some parallels to today’s history in the U.S. This is not a political statement, but humans should be able and willing to learn from mistakes made in the past. Right now I’m not so sure this is happening. I also want people to know more about the way life was lived in civilian Germany during and after the war. You can read on Wikipedia that after the war ended, the Allied Forces provided rations amounting to 1,200-1,500 daily calories per person per day. And that was supposedly a low amount to prevent an uprising. That is completely false. Germany’s infrastructure was so broken, there was hardly anything. Sure, they received ration cards with words like flour, sugar, meat and bread printed on them. But the stores remained empty another three years until the currency reform in June 1948.

What is the most important thing, as you see it, about recounting the events and ordeals of wartime Germans, those not involved in Hitler’s madness, but who were most certainly victimized by it?
I want people to understand what life was like for ordinary people and especially children during that time. That generation of war children just took the abuse and after the war ended, everyone was in a hurry to move on. Nobody gave those kids a second thought. And so they sucked it in, grew up and created lives as best they could. In later years they were still accused of being Nazis because they happened to live at that time. In addition to the war theme, Lilly’s personal struggle with the betrayal of her father and boyfriend show us how complicated love and family relationships can be. Nothing is cut and dry, black or white.

Do you speak about or engage in any formal meets where you talk about the results of your research and the effects that war has on the survivors, in particular, the children of wartime?
I’m available to share and discuss the history of Germany’s war children, of life during WWII and postwar Germany. I work with book clubs, schools, retirement homes and really any organization interested in history. I use lots of original images. Nothing speaks louder than these historic black and white shots.

Is there anything you would like to say to others who might possibly have a similar passion to write a more biographical memoir about their own family’s past?
I always advise people to speak to their elders and record their memories: write them down, ask for details. Even if nothing formal comes of it, we must realize that with every generation, the individual stories die out, the information is lost. The best lessons, the best stories always come from the small, individual tales, which when we look at them closely become remarkable. A quote in my bio says this: “Nearly every place holds some kind of secret, something that makes history come alive. When we scrutinize people and places closely, history is no longer a date or number, it turns into a story.”

In closing I’d like to say, don’t be afraid of what you may find. Secrets have a way of coming to the surface. Might as well stare them in the face head on.

Thank you so much for having me!