While every author strives to achieve more book reviews and ratings from readers, and should of course, we at International Writers Inspiring Change, thought it important to point out that Amazon ratings and reviews are not the only benchmark measuring success.

We recently featured Loretta Napoleoni, an investigative journalist from Italy who published THE ISLAMIST PHOENIX, a book which pulls back the curtain and exposes the truth behind ISIS and the terrorist threat in the Middle East, Syria and Iraq. 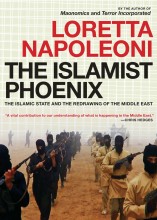 Napoleoni is a good example, and of course there are many out there, of an author who is making a difference in the world. She was recently seen on a major talk show in Europe (Skavlan) where she spoke about her book. Last year she was featured at the Scandinavian Book Fair in Sweden and was the focus of considerable media about her book.

There is little doubt that THE ISLAMIST PHOENIX has, and is creating waves of influence, and inspiring the minds of hundreds if not thousands of people who are waking up to the fact that terrorism is a global business today, spawned and created so that its backers can use them to fight their proxy wars in order to achieve other ends – and the West, are quite complicit in this as well as others.

The moral of the story – inspiring authors don’t always get the highest ratings on Amazon, at least not yet, but they are making a difference in the world one person at a time.

Case in point, THE ODYSSEY, by the famous Greek poet, Homer, one of the oldest books in existence, dated some 2000 years ago, a wonderfully beautiful epic story, has had just over 1200 reviews posted to Amazon by its readers, and yet, that book remains one of the most influential pieces of writing ever penned. One certainly could not judge that story based on the volume of reviews because it is a memorable classic and quite timeless.

We’re not suggesting that one shouldn’t try to climb the ladder to higher ratings and reviews as an author – of course that is valuable and everyone wants such. We are simply pointing out that there are other benchmarks too and ones which cannot easily be seen nor measured, but are like ripples influencing the minds and lives of people around the world.

This is why IWIC – International Writers Inspiring Change, exists, because we want to encourage all authors to keep writing, we want to promulgate literacy, books, reading and art, and most of all – their inspiration to motivate and change the world, because authors influence our culture and our future, and every voice and every book can and will echo in its own way down the corridors of time.